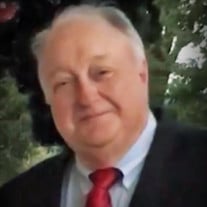 Alan Moss, 75, of Bolivar, passed from this life Monday, February 22 in Jackson, Tennessee. The husband of Janette Hamm Moss, who survives, he was a truck driver with Hardeman-Fayette Co-Op, retiring in 2010 and owned New Hope Grocery for 20 years. He also was a mail carrier and a farmer. He was born July 25, 1945 in Hardeman County, son of the late Luther S. Moss and Mary Walton Moss and lived his whole life here in the county. He served 7 years in the Tennessee National Guard and was activated to Memphis in 1968 for riot patrol after the assassination of Dr. Martin Luther King. He enjoyed farming, working his cows, gardening and coon hunting, but especially loved his church family and being around his grandchildren and great grandchildren. Mr. Moss was a past board member of the Farm Bureau and was a Deacon and faithful member at Parrans Chapel Baptist Church. Survivors include his wife, whom he married on June 23, 1967, Janette H. Moss of Bolivar; three daughters, Patricia Anthony (James) of Medon, Kathy Clark (Richard) of Bolivar and Janet Murphy (Matt) of Columbia, MO; a nephew, Tim Moss (Karen) of Bolivar; a niece, Mary Gwen Foust (Chuck) of Euliss, TX; 7 grandchildren, Morgan Blake (Ryan) of Jackson, Cannon Anthony (Ashley) of Jackson, Hailey Anthony of Medon, Whitney Anthony of Medon, Emily Lowe (Dakota) of Olive Hill, Ian Clark of Bolivar, Lydia Murphy of Columbia, MO and Sophie Singh (Justyn) of Colorado Springs, CO; 2 great grandchildren, Violet Blake and Vivian Lowe, and a host of nieces and nephews. In addition to his parents, he was preceded in death by a brother, Ray Moss and his wife, Sarah. Memorial contributions in his name may be sent to Bolivar First Baptist Church Children's Camp or Parrans Chapel Baptist Church. Please wear a mask or facial covering while attending the visitation or service for Mr. Moss. While visiting or attending services, please consider the following guidelines: * Maintain 6 feet between yourself and the next closest person; * Refrain from hugs and handshakes; * When you sneeze or cough, use your elbow to cover your nose and mouth; * Wash your hands often; * Avoid touching your face; and * Minimize time spent in places where people gather. Thank you.

Alan Moss, 75, of Bolivar, passed from this life Monday, February 22 in Jackson, Tennessee. The husband of Janette Hamm Moss, who survives, he was a truck driver with Hardeman-Fayette Co-Op, retiring in 2010 and owned New Hope Grocery for 20... View Obituary & Service Information

The family of Alan Moss created this Life Tributes page to make it easy to share your memories.

Alan Moss, 75, of Bolivar, passed from this life Monday, February...

Send flowers to the Moss family.