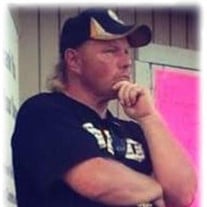 Mr. Anthony Glenn Burleson Sr. was born July 23, 1969, in Lawrenceburg, TN the son of the late Charles Everette Burleson Sr. and Emma Ellen Cummings Burleson. He was united in marriage to the former Peggy Stricklin on August 10, 2001. Mr. Burleson worked at a sawmill and was a member of the Pentecostal/Holliness faith. He will be fondly remember for his love for country music and playing his guitar. In his spare time he loved to watch the Steelers play and always made a point to watch his boys play sports. He departed this life on Monday, December 27, 2021, in Clifton, Tennessee at the age of 52 Years, 5 Months, 4 Days. He is survived by his wife Peggy Burleson of Clifton, TN; two sons, Anthony Burleson Jr. of Clifton, TN, Alexander Emery Burleson of Clifton, TN; a daughter, Mercedes Burleson of Pell City, AL; three brothers, Charles Everette Burleson Jr. of Waynesboro, TN, Kerry Lee Burleson of Waynesboro, TN, Curtis Burleson of East Prairie, MO; four sisters, Sherry Burleson of Caruthersville, MO, Glenda Juarez of Waynesboro, TN, Karen Haddock of East Prairie, MO, Angie Skelton of Waynesboro, TN; and two grandchildren, Addison and George Kelley. In addition to his parents, he is preceded in death by two brothers, Richard Burleson, Alvie Burleson: and a sister, Amy Moore. Services will be held on December 30, 2021 at 11:00 AM at Shackelford Funeral Directors at Waynesboro in Waynesboro, Tennessee, with Tracy Love officiating. Burial will follow in the New Salem at Lawrenceburg, Tennessee Visitation will be held Wednesday December 29, 2021 from 6:00 PM till 8:00 PM and again December 30,2021 from 9:00 AM till service time.

The family of Anthony Glenn Burleson created this Life Tributes page to make it easy to share your memories.

Send flowers to the Burleson family.