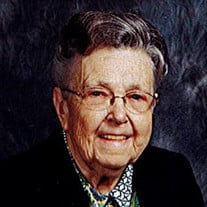 Arlie S. Holland of Mishawaka, IN

Arlie S. (Stutts) Holland, residing in Mishawaka, IN, passed away at 4:55 a.m. Thursday, February 18, 2021 at Bell Tower in Granger, IN, at the age of 97. She was born March 29, 1923 in Wayne County, TN, the daughter of the late Kenneth W. & Edna (Beatty) Stutts. On November 9, 1946 in Corinth, Mississippi, she was united in marriage to William Leslie Holland. Together, they enjoyed nearly 60 years of marriage until his passing on April 27, 2006. She lived most of her life in Tennessee until she and her husband moved to northern Indiana in 2004. She retired in 1981 as a shoe cutter for Brown Shoe Company where she worked for 40 years. She was a longtime member of Beauty Hill Pentecostal Church in Bethel Springs, and Calvary Chapel in Granger, IN. Mrs. Holland is survived by her daughter and son-in-law, M. Monette & Rev. Bob Moore of Mishawaka, IN; son and daughter-in-law, Rev. Larry & Suzanne Holland of Frisco, TX, along with three grandchildren, Michael (Laura) Holland, Michelle (Steve) Creamer, and Meredith (Rev. Ryan) Searfoss, and five great-grandchildren, Rachel (Matt) Feurtado, Rebecca Holland, Jonathan, Alexander, and Nicholas Searfoss, and three step-grandchildren, Hannah (Josh) Crim, Hailey (Darien) Gipson, and Harrison Creamer, along with two sisters, Pearl Akers of Savannah, TN; and Joan Triplett of Lebanon, TN; and a brother Earl Stutts of Waynesboro, TN. Along with her husband, she was also preceded in death by three sisters, Loraine Pettus, Elsie Davis and Ruby Pace, and a brother Ralph Stutts. Services celebrating the life of Mrs. Holland will be at 11:00 a.m. Saturday, Feb. 27, at Shackelford Funeral Home in Selmer, TN where visitation will be one hour prior to the service. Internment will follow at Lake Hill Memorial Gardens in Bethel Springs . Contributions in memory of Mrs. Holland may be offered to Calvary Chapel, 53494 Fir Road, Granger, IN 46530. Online condolences to the family may be offered at www.palmerfuneralhomes.com The Palmer Funeral Home-River Park Chapel, South Bend, is assisting the family with arrangements.

The family of Arlie S. Holland of Mishawaka, IN created this Life Tributes page to make it easy to share your memories.

Send flowers to the Holland family.