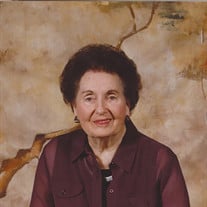 Elizabeth Ann Ward was born March 6, 1928 in McNairy County, the daughter of the late James L. and Jewel Wilkins Gilchrist. Mrs. Ward attended Adamsville High School where she was a member of the girls' basketball team. She was a member of... View Obituary & Service Information

The family of Bet Ward of Adamsville, TN created this Life Tributes page to make it easy to share your memories.

Send flowers to the Ward family.