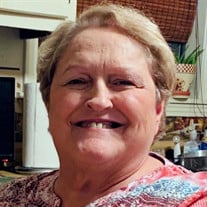 Bettye L. Baker, 71, of Bolivar, passed from this life Saturday evening, May 1, 2021 at St. Francis Hospital in Bartlett. Mrs. Baker, a retired Registered Nurse, was a member of Bolivar First Baptist Church. She enjoyed spending time with family and serving alongside her late husband, Rev. Doug Baker. The daughter of the late James Harold and Ruth Green Hooper, she was born and raised in Crocket County, TN. The family later moved to Halls in 1965. Bettye was a graduate of Halls High School and received her Bachelor of Science degree in Nursing from Union University in Jackson. She began her nursing career as a pediatric nurse at Ft. Worth Children's Hospital in Texas while her husband, Doug, whom she married on August 15, 1971, attended seminary in Ft. Worth. She has held numerous positions in the nursing profession throughout her career while serving beside her husband in his ministry. She is survived by a son, Michael Baker of Bolivar; a daughter, Amy Hannis (David) of Bolivar; and two grandchildren, Ethan and Landon Hannis, both of Bolivar. She is also survived by two sisters, Martha Buck (Garry) of Gallatin, TN and Tammie Hardy (Joe) of Halls, TN. In addition to her parents, she was preceded in death by her husband, Rev. Doug Baker in 2019 and a son, Jeffrey Wayne Baker. Memorial contributions in her name may be sent to Tennessee Right-To-Life (www.tnrtl.org/donate).

The family of Bettye L. Baker created this Life Tributes page to make it easy to share your memories.

Bettye L. Baker, 71, of Bolivar, passed from this life Saturday...

Send flowers to the Baker family.