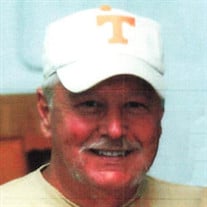 Bill Hollingsworth was born June 20, 1944 in McNairy County, TN the son of the late Marvin E. and Cornie Inman Hollingsworth. He was united in marriage to Susan Landreth on July 16, 1966. Mr. Hollingsworth worked for General Electric for over... View Obituary & Service Information

The family of Bill Hollingsworth of Adamsville, Tennessee created this Life Tributes page to make it easy to share your memories.

Send flowers to the Hollingsworth family.