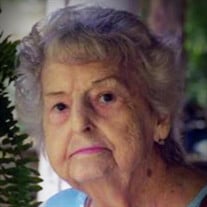 Mrs. Chambers passed away Wednesday morning at Maury Regional Medical Center in Columbia, TN. A native of Luxora, AR, she lived in Grand Junction from 1993 - 2010, at which time, she and Mr. Chambers moved to Hohenwald, TN. Prior to living in Tennessee, the Chambers' had lived in Cayce, MS for 28 years. She married Mr. Frank B. Chambers, who survives, on March 18, 1956. Mrs. Chambers was a member of the Grand Junction Baptist Church and had formerly served as secretary of her Sunday School class. For several years, she had worked as a school bus driver for the Shelby County School System and also was a nanny caring for small children. In her spare time, she enjoyed raising flowers, canvas needlework and staying involved in the community activities of Grand Junction while still a resident there. In addition to her husband, she is survived by three daughters, Debra Ann Reaves (Phillip) of Collierville, Rhonda Bean (Tom) of Grand Junction and Heather Nicole "Niki" McConnell (Ron) of Hohenwald; one sister, Ora Lee Pierce of Como, MS; five grandchildren, Christy Coe (Brian), Cory Reaves (Kelley), Jacob Moore, Trey McConnell and Jesse Boswell; and six great-grandchildren, Jordan and Lexi Smith, Caroline Reaves, Judy Moore, Chase McConnell and 'one on the way'. Preceding Mrs. Chambers in death were her parents, Joel and Louise Alexander Wiley. While visiting or attending services for Mrs. Chambers, please consider the following guidelines: * Maintain 6 feet between yourself and the next closest person; * Refrain from hugs and handshakes; * When you sneeze or cough, use your elbow to cover your nose and mouth; * Wash your hands often; * Avoid touching your face; and * Minimize time spent in places where people gather. Thank you for your thoughtfulness and consideration.

Mrs. Chambers passed away Wednesday morning at Maury Regional Medical Center in Columbia, TN. A native of Luxora, AR, she lived in Grand Junction from 1993 - 2010, at which time, she and Mr. Chambers moved to Hohenwald, TN. Prior to living... View Obituary & Service Information

The family of Billie Jo Chambers created this Life Tributes page to make it easy to share your memories.

Send flowers to the Chambers family.