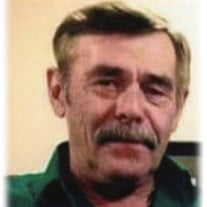 BILLY (DAFFY DUCK) MCLIN was born in Wayne County, Tennessee on May 6, 1961 the son of the late J. C. "Jake" McLin and Dorothy Mae Moore McLin. Billy served his country proudly in the Tennessee National Guard and was a truck driver for 25... View Obituary & Service Information

The family of Billy "Daffy Duck" McLin created this Life Tributes page to make it easy to share your memories.

was born in Wayne County, Tennessee...

Send flowers to the McLin family.