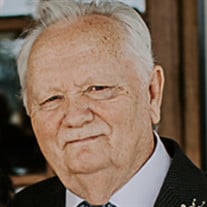 Billy Wayne Parmely was born July 26, 1947 in McNairy County, TN the son of the late Issac Parmely and Ilene Littlejohn Parmely. He was baptized at Eastside Church of Christ. He worked 30 plus years for Harman Automotive in Bolivar. He enjoyed... View Obituary & Service Information

The family of Billy Wayne Parmely of Ramer, TN created this Life Tributes page to make it easy to share your memories.

Send flowers to the Parmely family.