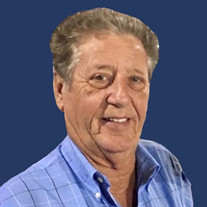 Billy E. Smith was born on September 24, 1946. He passed into the arms of Jesus on September 24, 2021. Known as “The Rocking Chair Man”, he had spent much of his life working, beginning with his delivery route in a Pulaski Milk truck. After that he tried selling insurance, but wearing a suit was simply not an agreeable way to spend his time, so he moved on to Tru-Temper where he worked as a timber buyer. Eventually he started his own company, S & V, where he made drum sticks and bar stool blanks. When he sold that he started another, Billy Smith Wood Products, where he produced a variety of articles but was best known for his rocking chairs. He even contemplated having bee hives, but Fate had other ideas and he never had the chance. Of course, Billy enjoyed his woodworking, but he also loved his farm animals—his cows and chickens and horses and pigs. He also enjoyed gospel music and gladly traveled with his wife Christy when she toured with the group “Still Standing”. He might not be performing with them, but he was always sitting in the back, smiling. Exactly seventy-five years after he was born, Billy passed from this life in the same little river town where he was born. He leaves his wife Christine Ann “Christy” Burns Smith of Clifton, Tennessee, his son David Smith and David’s wife Amanda, his two daughters Anita Rose and her husband, Don Rose, Jr. and Beth Witte and her husband Kevin Witte; his sister Edith Franks and her husband Bill and his brother Fay Smith; ten grandchildren, Taylor Smith, Emma Smith, Lilly Smith, Maggie Smith, Brad Rose and his wife Karlin, Chad Rose and his wife Andrea, Nathan Rose, Dylan Stevens, Caitlyn Stevens, and Chloe Witte, and his four great-grandchildren, Caleb Owen Rogers, Brody Rose, Sutton Rose, and McKenzie Ruth Rose. Billy was preceded in death by his parents, Alf and Rixie Gordon Smith, his first wife Sandra Templeton Smith, and his siblings, Walter Smith and his wife Jane, Jack Smith, Carl Smith, Claud Smith, Glen Smith, Bobby Jean Smith and his wife Patricia, and May Smith. The family has requested that memorial donations be made to The Revival Center in Clifton, Tennessee where Billy was a member.

The family of Billy E. Smith created this Life Tributes page to make it easy to share your memories.