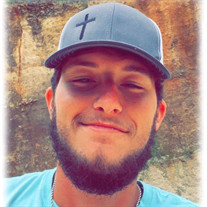 Blasedon Gene Smith was born June 9, 2001 in Columbia , TN the son of Rickey Smith and Melissa Simmons Smith. Blasedon worked for Roger's Group and was a member of the First Baptist Church in Waynesboro, Tennessee. Blasedon departed this life... View Obituary & Service Information

The family of Blasedon Gene Smith created this Life Tributes page to make it easy to share your memories.