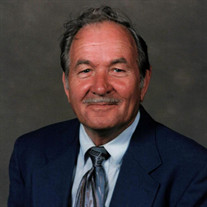 On February 28, 1931, Bobby Gene Maxedon came into this world. He was one of nine children born to Alvah B and Edith Hamm Maxedon. On February 2, 1960 he made the second best decision of his life. A decision that fell only behind his acceptance of Jesus. He married Linda Fay Sanders. If you asked him, he had managed to marry the prettiest woman this world had ever seen. A fact he would remind her of every day for the next sixty-one years as they spent their lives together. It was a love story for the ages, and the greatest legacy they created for their children, grandchildren, and great grandchildren. The two settled down and built their home and grew their family in the tiny community of Purdy, TN. It was here Bob became the proud father of two daughters Shena Maxedon Ervin and Rhonda Maxedon Miller (husband Rick). He became an accomplished electrician and plumber and spent his career teaching others the trade he loved. It wasn’t uncommon to see him show up on a job with a 9 year old grandson in tow as his assistant for the day. Nothing gave him more joy or filled him with more pride than his 6 grandchildren and 8 great-grandchildren. He even looked past the few that made questionable voting decisions. He was strong and kind and wise and so very loved by his family. Though Bob was only blessed with two biological children, he had a host of nieces and nephews that he loved dearly as his own. Among this special group of nieces and nephews was Arlus Burney who spent countless hours by his side and stayed with him moment by moment in his last days. That was the thing about him. He never ran out of love for people. Bob could love the hardest of them all to love. He had a knack for people. Maybe it was because people can sense when they are truly cared about. He had a way of making everyone his friend. He built a name for himself in his community, but it wasn’t because of wealth or power it was simply kindness. A kindness he would tell you he learned only from the “Good Book”. At Ninety years old, if you were to walk in his home you would most likely find his bride sitting in his lap, CNN playing on the television, and his Bible in his hand. He spent hours pouring over scripture and learning each and everything he could about a Savior that was so very real in his life. One he had leaned on through the loss of parents, siblings, nieces, nephews, cousins and friends. It was his sincere love for Christ that made Bob Maxedon all the admirable things he was and he would never hesitate to tell you about it. Of course, while he was telling you about it he would probably have you laughing. Bob was full of one liners and snappy come backs. He had a gift for humor that was unsurpassed. To be in his presence was pure joy. He created a household overflowing with laughter and it was a household that was always full. From grandkids to friends someone was always dropping in asking for electrical advice, relationship advice, and scripture interpretation or to debate the latest political occurrence. His home was welcome to all. He loved people from every walk of life and people loved him. He was a giant among men. At 80 years old he conquered a severe brain bleed. At 84 years old he beat lung cancer. Bob wasn’t arrogant or prideful but was incredibly strong. He was the strength of his family a job he did well. If you were to meet Bob even in passing you would know that he was special, and for those blessed enough to call him theirs they know he is the closest thing to Christs love they will ever experience this side of heaven. The world lost a tremendous gift when at 1:30am on December 14, 2021 Bob Maxedon took his last breath on this earth and opened his eyes for the first time in glory. “I have fought a good fight, I have finished my course, I have kept the faith”. Bob leaves behind his wife Linda Maxedon; two daughters, Shena Maxedon Ervin and Rhonda Maxedon Miller (husband Rick); A sister Ann Sweat; six grandchildren: Ashley Ervin Whirley (husband Jay), T.J. Ervin, Cameron Miller ( wife Allie), Courtney Miller Cook ( husband Matt), Austin Maxedon Ervin (wife Kaley), Ainsley Sarah Ervin; eight great-grandchildren, Jackson Miller, Aubrey Cook, Madi Claire Cook, Tuesday Ervin, Jamisyn Whirley, Knox Ervin, Kase Maxedon Ervin, and August Cook; as well as a host of nieces and nephews and extended family. He was preceded in death by both his parents Alvah and Edith Hamm Maxedon; his siblings: Gerald Maxedon, Bill Maxedon, Virgil Maxedon, Pitts Maxedon, Julian Maxedon, Jackie Maxedon and Lila Koblentz; a son in law, Tony Ervin; and a very special nephew, Tony Whitley.

On February 28, 1931, Bobby Gene Maxedon came into this world. He was one of nine children born to Alvah B and Edith Hamm Maxedon. On February 2, 1960 he made the second best decision of his life. A decision that fell only behind his acceptance... View Obituary & Service Information

The family of Bob Maxedon created this Life Tributes page to make it easy to share your memories.

Send flowers to the Maxedon family.