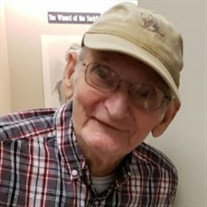 Bobby A. Broyles was born in Savannah, Tennessee on August 25, 1930 the son of the late William Harry Broyles, Sr. and Elizabeth Beatrice House Broyles. On October 24, 1952 he was united in marriage to Nola Beatrice Vickery, who preceded... View Obituary & Service Information

The family of Bobby A. Broyles created this Life Tributes page to make it easy to share your memories.

was born in Savannah, Tennessee on August 25,...

Send flowers to the Broyles family.