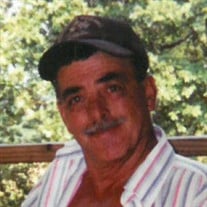 Bobby Lee Dickey was born August 30, 1952 in McNairy County, TN the son of the late Lindsey Esco and Amanda Kathleen Wyatt Dickey. He was united in marriage to Sharon Greene on September 5, 1974. Bobby Lee worked for many years as a truck... View Obituary & Service Information

The family of Bobby Lee Dickey of Bethel Springs, Tennessee created this Life Tributes page to make it easy to share your memories.

Send flowers to the Dickey family.