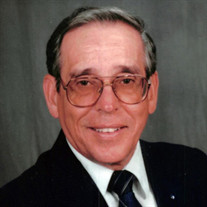 Bobby Gene Shelby, 83, of Grand Junction, passed from this life Sunday morning, April 18, 2021 at his home. He was born and spent his younger years in Benton County, MS, the son of the late Alford and Gussie Wilbanks Shelby. After high school, he moved to Memphis where he met his future bride, Lucille Webster. Bobby and Lucille were married on March 19, 1960. After moving to Middleton for four years, the Shelby's settled in Grand Junction in 1976. There, Mr. Shelby was owner/operator of Shelby's Grocery. He also worked 10 years at Grand Junction Video and 7 1/2 years for FedEx. He was a long-time, faithful member of Grand Junction Baptist Church where he served as Sunday School Teacher and Sunday School Director and Youth Choir Director. He was also a member of Gideon's International. His love for young people led him to start the first Dixie Youth Baseball League in Grand Junction. He wrote and directed a local Hee-Haw show there as a fundraiser for DYL uniforms. His civic-mindedness inspired him to run for mayor of Grand Junction, a position he held for 10 years. He also become a 32nd degree Mason and was a member of the Grand Junction Ruritan Club. Mr. Shelby served his county in the US Army from 1960-62. In his leisure time, he was a avid golfer who, 2-times, achieved a golfer's dream: a hole-in-one. Once at Hardeman County Golf and Country Club and at Grand Valley Lakes where he once lived - just to be close to the golf course. In addition to his wife of 61 years, he is survived by a daughter, Tina Embrey of Grand Junction; a son, Terry (Chris) Shelby of Olive Branch, MS; son-in-law, Robert Embrey of Memphis; two grandchildren, Rebecca Embrey and Colby (Holly) Shelby; step-grandchild, Matt Satterfield; two great-grandchildren, Madison and Wyatt Shelby; and a step-great-grandchild, Sophie Satterfield. Besides his parents, Mr. Shelby was preceded in death by three sisters, Daff Stoker, Cordie Goudy and Joyce Liming; and two brothers, Douglas and Curtis Shelby. Memorials may be sent to Gideon's International. [https://www.gideons.org]

Bobby Gene Shelby, 83, of Grand Junction, passed from this life Sunday morning, April 18, 2021 at his home. He was born and spent his younger years in Benton County, MS, the son of the late Alford and Gussie Wilbanks Shelby. After high school,... View Obituary & Service Information

The family of Bobby Gene Shelby created this Life Tributes page to make it easy to share your memories.

Bobby Gene Shelby, 83, of Grand Junction, passed from this life...

Send flowers to the Shelby family.