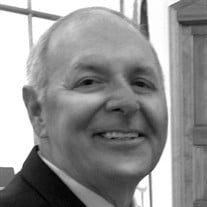 Bradford O’Neal Sipes 1/24/49 - 8/20/21 Brad was born and raised in Chester County, Tennessee. When he wasn’t working in his family’s grocery store, he was helping on the farm, or wandering in the woods with his father. He attended Chester County High School, where he was awarded many accolades, including Class President, Mr. CCHS, Best All-Around, and, the one that feels most appropriate: Friendliest. He had a heart as big as his passion for life, and loved celebrating the joys and successes of his many dear friends. He loved hunting and sailing and football—especially if it was being played by his alma mater, the University of Tennessee. He was obsessed with any and all electronic devices and was always the first to tell you about the next cool one that was coming out. Brad was also passionate about wildlife preservation. If you talked to him recently, you knew that he was excited about his newly planted field of native wildflowers and the growth and beauty it would provide for his family for years to come. Brad was incredibly proud of his family. He was preceded in death by his loving and generous parents, Thomas and Pearlene Sipes, and is survived by his three daughters, Stephanie Welsh (husband Eric), Lindsey Sipes and Kayce Singleton (husband Jonathan). He is also survived by four grandchildren, Beckett and Lachlan Welsh, and Jett and Brave Singleton—who adorably referred to him as MAN. Oh, and also his grand cat, Roxy (although, she was not 100% sure she wanted to be his friend, despite his efforts to win her over with his charm and a pocket full of treats). He wasn’t perfect, but he was a perfect example of hanging on, not giving up, and being the best father and friend that he could be. The MAN, the Myth, the Legend. The storyteller and the confidant. The first to come to your rescue when you were in need, and the last one to leave a party. Brad’s legacy will live on through the impact he made on his family and friends. A graveside memorial service will be held at Wyatt Cemetery in Hornsby, Tennessee, on Saturday, August 28th at 10:30am. The Sipes family does love flowers, but a donation sent to the Tennessee Wildlife Federation on his behalf would be fitting. Attendees are requested to wear masks at the graveside service.

The family of Bradford O'Neal Sipes of Bethel Springs, TN created this Life Tributes page to make it easy to share your memories.

Send flowers to the Sipes family.