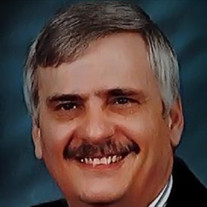 Bro. Dennis H. Callahan, age 66, of Saulsbury, departed this life on Monday evening, September 6, 2021 at his home. A life-long resident of Hardeman County, Bro. Callahan was the son of Leland Hayes Callahan and Margaret Louise Harrison Callahan, both of whom survive. He was a 1973 graduate of Middleton High School and received his BA and a MA from Liberty University. Dennis married the former Rhonda Hicks, who survives, on July 23, 1976. He also leaves his son, Doug (Chasity) Callahan of Saulsbury; two grandchildren, Ally Callahan (Hunter Crum, fiance) and Jonathan Callahan, all of Saulsbury; two sisters, Judy Callahan of Livingston, LA and Kay (Kline) Mengle of Bolivar; a brother, Roger (Betty) Callahan of Saulsbury; and a host of aunts, uncles, nieces, nephews, cousins and other extended family members. He was preceded in death by maternal grandparents, Horace Gillis and Cornelia Ione Carney Harrison; and paternal grandparents, Alec Neely, Sr. and Stevie Odella Burnette Callahan. During his 30 year ministry (May, 1989 - May, 2019), Bro. Dennis, as he was known to so many, pastored many churches in the community including Essary Springs, West Memorial, Ebenezer and Rocky Springs Baptist Churches. He conducted over 300 funerals and ministered to families during those difficult times. He had such a heart for people and was called especially to offer Godly counsel to loved ones. He shined at doing what he was called to while serving as chaplain and counselor at Western Mental Health Institute for 15 years and also as chaplain for Caris and Avalon Hospice until his retirement. In his leisure time, Bro. Callahan enjoyed farming, riding his tractor and Kubota side-by-side, fishing and the Great Smoky Mountains. Memorials may be sent to St. Jude Children's Research Hospital, Memphis, TN. [http://www.stjude.org]

The family of Bro. Dennis H. Callahan created this Life Tributes page to make it easy to share your memories.

Send flowers to the Callahan family.