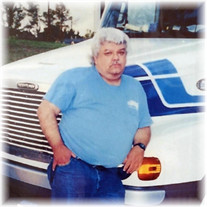 Bruce Feathers, 58, of Tiplersville, MS, passed from this life Sunday, June 6, 2021 at Magnolia Regional Hospital in Corinth, MS. He was born Wednesday, December 26, 1962, in Memphis, son of the late Brodie William Feathers and Nellie Gray Culver Feathers and lived in Tippah County since 2008. He was a truck driver, prior to becoming disabled, working for MS Carriers, J.B. Hunt, Big M Trucking and many more. He enjoyed fishing and hunting, going to Biscuits Steak House, and eating 'dream pie'. Everyone knew him as a 'happy-go-lucky' person who could make anyone laugh. He received his greatest happiness from being around his grandkids and his family, and playing with his dog 'Snoopy'. Mr. Feathers served in the National Guard and was a Baptist in belief. Survivors include his longtime love and companion, Vergie "Kittman" Glass, whom he had been with since Oct. 19, 2001; five daughters, April Brooks (Chris) of Ashland, MS, Amanda Barber (Joel) of Lamar, MS, Michelle Arnold (Jerry) of Tipton County, TN, April Cornelius (Guy) of Hornlake, MS and Brittany Glass (Quinton) of Memphis; a son, Kelton Russell of Barton, MS; two sisters, Tammy Breedlove (Jeff) of Lamar, MS and Lannie Yeager (Buck) of Ashland, MS; and 13 grandchildren, Dominic, Leland, Tyler, PayPay, Aaron, April Lynn, Allen, Katherine, Justin, Chris, Ethyn, Aryana and Alyana. In addition to his parents, he was preceded in death by a brother, Gordon William Feathers; a son in law, Timothy "T.J." Barber; 3 angel grandbabies; a niece, Kayla Breedlove and his best friends, James Churchill and Vernon Tice. Memorial contributions in his name may be sent to St. Jude Children's Research Hospital (www.stjude.org/donate).

The family of Bruce Feathers created this Life Tributes page to make it easy to share your memories.

Bruce Feathers, 58, of Tiplersville, MS, passed from this life...

Send flowers to the Feathers family.