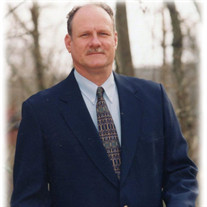 Carl Taylor Skelton of Waynesboro, TN was born February 17, 1948, in Waynesboro, TN; son of the late Sam Houston and Emma Mae Mathis Skelton. Carl departed this life March 3, 2022 @ 1:15pm at his home with family present at his bedside. Carl was united in marriage to Karol M. Stewart on July 4, 1968. Other than his parents, Carl was preceded in death by his sister Frances Free and son-in-law, Dr. Joe Hall. Carl started his career as a military police officer with the United States Army. He served as a city police officer, as a criminal investigator, later with the Wayne County Sherriff Department as chief deputy under Sheriff Guy Davis, prior to being elected sheriff, was employed with the Wayne County Boot Camp. Carl was a retired sheriff of Wayne County and has thirty-eight years of law enforcement and confinement specialist experience. He served as a training officer until his retirement in 2011. Carl is survived by his wife of 54 years, daughter Carla Kelso, Christy Hall and Carisa Pitts (Roger). Five grandchildren: Tyler Dixon (Hannah), Bailey Haddock (Nathan), Jazmyn & Wyatt Hall and Grayson Pitts. One great-grandson, Treyger Haddock and one great-granddaughter on the way. Brothers: Roy Skelton (Reba), Michael Skelton (Billie) of Waynesboro and Marty Skelton (Kimberly) of Selmer. Several niece and nephews. Carl loved hunting, fishing, basketball, and football and loved working in his yard; something that he passed on to his children and grandchildren. He will be remembered as a loving husband, proud father, and an awesome grandfather/great grandfather. He was proud to be a veteran and loved his country. Visitation will be held on Sunday, March 6, 2022 from 6:00 p.m. until 8:00 p.m. and on Monday, March 7, 2022 from 9:00 a.m. until 1:00 p.m. service time at Shackelford Funeral Directors in Waynesboro, TN. Funeral services will be held on Monday, March 7, 2022 at 1:00 p.m. at Shackelford Funeral Directors in Waynesboro, TN. The burial to follow in the family homeplace with Military honors presented following the service. Carl is of Baptist faith with Greg Easton officiating the services. Pallbearers will be Roy Skelton, Michael Skelton, Marty Skelton, Tyler Dixon, Nathan Haddock and Roger Pitts. Honorary pallbearers will be Jazmyn Hall, Jeremiah Robins, Wyatt Hall, Grayson Pitts, Bailey Haddock, and Treyger Haddock. In lieu of flowers the family request memorial donations be made to the Sherriff Carl T. Skelton Memorial Fund at any Wayne County Bank or c/o- Wayne County Sherriff’s Office- 1016 Andrew Jackson Dr., Suite 10, Waynesboro, TN 38485.

The family of Carl Taylor Skelton, Waynesboro, TN created this Life Tributes page to make it easy to share your memories.

Send flowers to the Skelton family.