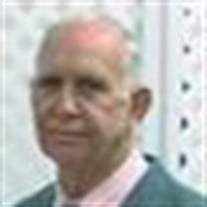 CARLLUS (BOPS) ADKINS was born in Van Lear, Kentucky on March 12, 1941 the son of the late Wallace and Gladys Caudill Adkins. In 1965, he met the love of his life, Mary Ann Samons. They married December 4, 1965 in Clintwood, Virginia. Carllus and Mary Ann just celebrated 55 years together. He departed this life on Tuesday, January 26, 2021 in Savannah, Tennessee at the age of 79 years, 10 months and 14 days. Carllus owned Adkins Mid-town Gulf for almost 25 years after moving to Tennessee. He loved to fish, golf and bowl in his spare time, and getting to teach his grandson Rodney Lewis these things was one of his greatest joys. Carllus loved watching the youth and high school bowling teams. You could always find him watching the Grizzlies basketball, the Braves baseball, and any golf on television. He loved to grow tomatoes and taking care of his yard and golf greens. Whenever he was in town he loved passing out mints, and always had a pocket full. His five '57 Chevy's were his prize collection and won him many trophies in car shows. Carllus was a member of Hopewell Baptist Church in Savannah, Tennessee. In addition to his wife of 55 years, Mary Ann of Savannah, Tennessee, he is survived by his children, Carllus Adkins Jr., of Texas, Kathy Williams of Indiana, and Judith Adkins of Savannah, Tennessee; grandchildren and great grandchildren; four sisters; one brother; many nieces and nephews; and his two special dogs, Katie and Lucky Lady. In addition to his parents, he was preceded in death by one stepson, one sister, and three brothers. Memorial donations may be made to Hopewell Baptist Church, Savannah, Tennessee or St. Jude's Children's Hospital, Memphis, Tennessee. Family request social distancing and masks be worn at funeral service.

CARLLUS (BOPS) ADKINS was born in Van Lear, Kentucky on March 12, 1941 the son of the late Wallace and Gladys Caudill Adkins. In 1965, he met the love of his life, Mary Ann Samons. They married December 4, 1965 in Clintwood, Virginia. Carllus... View Obituary & Service Information

The family of Carllus (Bops) Adkins created this Life Tributes page to make it easy to share your memories.

was born in Van Lear, Kentucky on March...

Send flowers to the Adkins family.