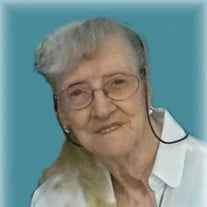 Charlene Davis McNair was born June 13, 1930 in McNairy County, TN the daughter of the late Troy and Annie Plunk Davis. She was united in marriage to Wylie McNair in June of 1975. Mr. McNair preceded her in death in 2000, following 25 years of marriage. Mrs. McNair worked in the garment industry, retiring from Jetrick's. She also worked for Oakley Fashions in Jackson as well as several other manufacturing facilities in Henderson and the surrounding area during her career. Mrs. McNair was a lifelong member of the Maggie Jones Memorial Methodist Church in Finger and was the last surviving member of the Davis Family Quartet. She loved singing and enjoyed working word search puzzles in her free time. She loved with every ounce of her being. Fiercely! Jesus, family, then everyone else. She would always meet you with a hug. It took so little to bring a smile to her face, just a note or a card. She was always ready to tell you about her family and show you her picture collection. Music was in her blood and her beautiful soprano voice is leading the Davis family again in praises to Jesus. Mrs. McNair departed this life on July 2, 2020 in Jackson, Tennessee at the age of 90 Years, 19 Days. She is survived by a daughter, Shannon Garner and husband Larry of Finger, TN; three grandchildren: Sonya Perrigo and husband Jerry, Jason Garner and wife Jennifer, and Melanie Miller and husband Rickey, all of Finger, TN; six great-grandchildren: Sydney Perrigo, Shelby Perrigo, Jacob Perrigo, Jensen Garner, Jaisley Garner, and Owen Miller; and many extended family and friends. In addition to her husband and parents, Mrs. McNair was preceded in death by three brothers: Raymond Davis, James Kermit Davis, and Charles Davis,and a sister, Newana Vires. Pallbearers: Jimmy Davis, Jason Garner, Jerry Perrigo, Rickey Miller, Owen Miller, Jacob Perrigo. Visitors are requested to wear masks when attending the visitations or service.

Charlene Davis McNair was born June 13, 1930 in McNairy County, TN the daughter of the late Troy and Annie Plunk Davis. She was united in marriage to Wylie McNair in June of 1975. Mr. McNair preceded her in death in 2000, following 25 years... View Obituary & Service Information

The family of Charlene Davis McNair of Finger, TN created this Life Tributes page to make it easy to share your memories.

Send flowers to the McNair family.