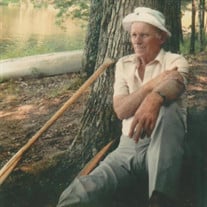 Charles Henry Hall, III, AKA Buddy, Daddy, Charlie, Papa, Grandaddy, and Bubba passed from this life on Sunday, December 27, 2020 at his home in Saulsbury. Mr. Hall was 94 years old. He was born on September 25, 1926 in the Brick House on the family farm outside of Saulsbury to Emma Louise McClellan Hall and Charles Henry Hall, II. He lived most of his life in the Brick House. He moved to “town” in 2015. Mr. Hall served in the United States Navy. He enlisted on September 18, 1944, just shy of his 18th birthday. He was a seaman, first class and was awarded the Victory Medal at the end of World War II. He was honorably discharged on August 20, 1946. On September 1, 1951 he married Nancy Boyd Franklin Hall. They were married 54 years until her death in 2005. He was a member of the Immanuel Episcopal Church in LaGrange. Mr. Hall is survived by two daughters, Susan Lucas Hall of Starkville, Mississippi, and Iva Rebecca Heckmair (Josef) of Weihenstephan, Germany; two sons, Bernard F. “Ben” Hall (Brenda) of Middleton, and Jesse K. Hall (Leslie) of Saulsbury; ten grandchildren, Bernie Hall, Laura Sparks (Daniel), Nathan Hall, Lucas Hall (Sabrina), Vinzenz Heckmair, Anna Heckmair, Julia Heckmair, Clare Walter (Jonathan Christian), Jenna Fesmire (Jeremy), and Jake Hall (Carly Weems); and seven great grandchildren, Anthony Sparks, Jade Sparks, Michael Antonucci, Eli Fesmire, Laycie Currier, Demos Hall, and Alena Hall. He was preceded in death by his parents, his beloved wife, Nancy, a sister, Louise Hoyt, a brother Frank Hall, a son, Charles Henry “Hank” Hall, V, and an infant son, John Hall in 1955. Mr. Hall was a graduate of Grand Junction High School. He was a cattle farmer and retired from the State of Tennessee as a regional supervisor of the re-appraisal program for West Tennessee. Mr. Hall was known for hosting a good happy hour, spending time at the Turnaround, working on his family farm, dispensing unsolicited advice, and telling a good story, both true and untrue. In his words, “I am subject to lie a little.” He was tenacious, fiercely independent, and unconventional and his family is grateful for his life. While visiting or attending services for Mr. Hall, please consider the following guidelines: * Maintain 6 feet between yourself and the next closest person; * Refrain from hugs and handshakes; * When you sneeze or cough, use your elbow to cover your nose and mouth; * Wash your hands often; * Avoid touching your face; and * Minimize time spent in places where people gather. Thank you for your consideration.

Charles Henry Hall, III, AKA Buddy, Daddy, Charlie, Papa, Grandaddy, and Bubba passed from this life on Sunday, December 27, 2020 at his home in Saulsbury. Mr. Hall was 94 years old. He was born on September 25, 1926 in the Brick House on... View Obituary & Service Information

The family of Charles Henry Hall, III created this Life Tributes page to make it easy to share your memories.