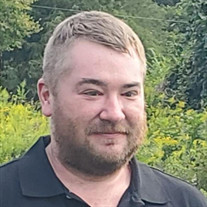 Christopher George Moditz July 18th 1985 – June 14th 2021 He is survived by his parents, Karen and Pete of Selmer TN; sister Clarissa Moditz of Scotland; Grandfather George Moditz of New Jersey and a multitude of cousins, aunts, and uncles, all scattered around America. He is preceded in death by grandparents, Myrtle ‘Muff’ Kelly, J. Kenneth ‘Dosey’ Kelly, and Phyllis Moditz. Chris had a fantastic childhood spent running buck-wild in the woods with his sister who constantly plagued at his heels. He was good-natured even as a child, and remarkably patient of said sister, who often allowed him to take the blame for petty household crimes she herself had committed. Chris spent a few years in the rough-and-tumble sport of American football, playing defense as number 73. But despite being on the team, Chris remained his own person: the kind of person who seemed able to cross the boundaries of any stereotypical school group—football, band, nerds, geeks, punks. He was friends with all, always ready for a laugh with those around him, and always look out for his friends and do anything for them. Outside of football, Chris’ hobbies included owning (and often wrecking) automobiles that had been kitted up to sound as loud as humanly possible. During his high school years he is believed to have gently remodeled at least five different cars, including a white Supra, a red Supra, a ’74 Volkswagen Beetle, a Mitsubishi Eclipse, and a Chevy Blazer. Chris went on to try his hand at many jobs in adulthood, giving his characteristic good nature to all: whether it was roofing, working in the steel industry, plumbing, or operating and training others on forklifts, he was the kind of reliable employee a workplace could depend on. When not at work, he enjoyed nothing more than the simple things: hanging out with friends, the occasional addictive game on his phone, an annual mosey down the river with his pals, and the ever-present thought of becoming a motorcycle owner once more (the hey-day of his motorcycle years clearly never left him: surprisingly, this was also the one thing he never wrecked!). He enjoyed talking of the old times, and of the times and plans he might one day make. Though Chris has gone, his infectious laugh and smile, and the impact he made on all our lives will not be forgotten. Your friends and your family all miss you, Christopher George.

The family of Christopher George Moditz of Jackson, TN formerly of Selmer, TN created this Life Tributes page to make it easy to share your memories.

Send flowers to the Moditz family.