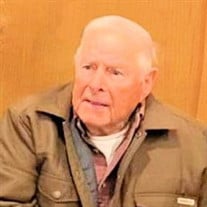 Curtis Roland was born November 5, 1933 in Jackson, TN the son of the late Emmitt (Bob) Forest Roland and Louise (Lulu) Hatch Roland. He was united in marriage to Shirley King on May 4, 1957. Mrs. Roland preceded him in death on December 21, 2016. They were married for 59 years. Mr. Roland worked for 47 1/2 years for Southern Laminating Company. He never let his crippled hand keep him from working hard and providing for his family. He loved working on his farm whether it was tending to the cattle, putting out feed, or riding the fields checking on the property...he did every task with great pride. Mr. Roland was a true Southern gentleman who treasured friendships and people. His friends were both young and old, his hugs were warm, his smile was contagious and his signature greeting of "Hey sugar or hey sug" was often returned with a smile and a hug. His kindness to others was second nature and an extension of his heart. He was a member of First Baptist Church in Selmer. Mr. Roland departed this life on January 12, 2022 in Jackson, Tennessee at the age of 88 Years, 2 Months, 7 Days. He is survived by three sons, Jeff Roland and wife Cindy of Arnold, MO, Tim Roland and wife Karen of Charlottesville , VA, Scott Roland and wife Kristie of Selmer, TN; a brother, Charles (Chick) Roland of Selmer, TN; five grandchildren, Lyndsey Smith and husband Daniel, Candice Candeto and husband David, Charlotte Roland, Haley Roland, Jesse Roland Fuller and husband Christopher Fuller; four great grandchildren; and a host of extended family and friends. In addition to his wife and parents, Mr. Roland was preceded in death by a daughter-in-law, Ladonna Roland; three brothers, Woodrow, Estel, and Norman (Bull) Roland; two sisters, Ruby Deberry, Evelyn Springer.

Curtis Roland was born November 5, 1933 in Jackson, TN the son of the late Emmitt (Bob) Forest Roland and Louise (Lulu) Hatch Roland. He was united in marriage to Shirley King on May 4, 1957. Mrs. Roland preceded him in death on December 21,... View Obituary & Service Information

The family of Curtis Roland created this Life Tributes page to make it easy to share your memories.

Send flowers to the Roland family.