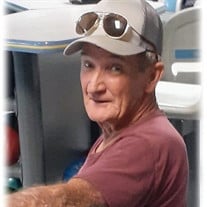 David M. Beckham departed this life on Thursday, December 30, 2021, at the age of 74 years, 2 months, and 5 days. He was born in Hardin County, Tennessee on October 25, 1947, the son of the late Curtis H. and Tiny V. Wade Beckham. David was a man who loved God and his family. He loved his children and grandchildren especially. David spent many happy hours in the hills and hollows with his family hunting, or on a creek bank, lake, or river fishing making precious memories and sharing lots of laughs. He also spent several years playing baseball with The Fountain of Youth team, he still spoke of those times with laughter. His humor and mischievous ways kept everyone around him on their toes. His days were spent feeding his goats and donkey, sitting on his porch, visiting with his constant companion, Joyce Bain, rambling off to see his grandchildren or finding mischief of some kind to get into. Before being forced into retirement by strokes David drove a fuel tanker for Willoughby Oil for 25 years. He hauled fuel from Memphis, Tennessee on President's Island to all of West Tennessee, parts of Middle Tennessee, and Mississippi, under the CB handle of "Uncle Dave". David is survived by his daughters, Marlene Beckham of Savannah, Tennessee and Chelle Payne (Scott) of Jackson, Tennessee; brother, Jim Beckham (Brenda) of Lutts, Tennessee; sister, Martha "Lynn" Turner of Savannah, Tennessee; special friend, Joyce Bain of Savannah, Tennessee; five grandchildren; and twelve great grandchildren. In addition to his parents, David was preceded in death by a brother, Curtis Howard Beckham, Jr. and a sister, Mary Elizabeth Beckham.

The family of David M. Beckham created this Life Tributes page to make it easy to share your memories.

Send flowers to the Beckham family.