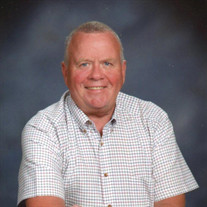 Mr. David Ross Berry, Sr., passed away January 23, 2022, at age 74 at Vanderbilt University Medical Center following a brief bout with cancer. Dave was born in Wayne County, Tennessee on December 18, 1947, to Mary Juanita Robbins Berry and Ross Beckham Berry. At age 3, Dave moved with his family to Michigan where he completed his education and worked at TRW Automotive in Sterling Heights. Definitely the highlight of Dave’s mostly chilly stay in Michigan was meeting his wife and lifelong companion Cheryl Pittman. Dave and Cheryl were married on October 3, 1970, and soon welcomed 2 children, David Jr and Kim, into their lives. In 1982, Dave moved his family from Utica, Michigan back to Wayne County, Tennessee where he went to work for TVA as a machinist and foreman. Following retirement, Dave and Cheryl spent as much time as possible at their second home in south Florida. When at home in Tennessee, Dave very much enjoyed farming, talking with his favorite dog Roscoe, riding his Harley, and watching Jeopardy. Dave was a Mason and spent quality time coaching his grandson Blake from the stands in various athletic pursuits. He was Catholic and attended St. Michael’s in Florence, Alabama. Dave was a good, solid, salt-of the earth family man, and he will be greatly missed. Mr. Berry is survived by Cheryl, his wife of 51 years, his two children, Dr. David Berry, Jr (Dee) of Madison, Mississippi and Kim Whitten (Tim) of Collinwood, Tennessee and his grandchildren, Ann Ross Berry, Hallie Butler, Mason Butler and Blake Whitten. He is also survived by his mother, Juanita Berry of Waynesboro, TN and his siblings, Ruth Clearhout (Mike) of Raleigh, North Carolina, Jeff Berry (Nancy) of Soddy Daisy, Tennessee and Billy Berry (Lisa) of Yankton, South Dakota as well as several beloved nieces and nephews. Dave was preceded in death by his father. Visitation will be Thursday evening, January 27, from 6 to 8 PM at Shackelford Funeral Home, 993 TN-13, Collinwood, Tennessee. The Mass of Christian Burial will be celebrated on Friday morning, January 28 at 10 AM at St. Michael’s Catholic Church, 2751 Co Rd 30, Florence, Alabama. Visitation will be thirty minutes before the service at the church. Pallbearers will be Mason Butler, Blake Whitten, Sal Passalauqua, Ross Berry, Ryan Berry and Tommy Wilkinson with honorary pallbearers being Tim Whitten, Ray Phillips, Smitty Smith, Tommy Beckham, Jeff Wilkinson and Barry Hanback. The family would like to thank Dave’s care team at Vanderbilt University Medical Center for their professionalism, expertise, but most of all for their compassion. In lieu of flowers, please consider donating to The Stuttering Foundation or the American Cancer Society.

The family of David Ross Berry Sr., Lutts, TN created this Life Tributes page to make it easy to share your memories.

Send flowers to the Berry family.