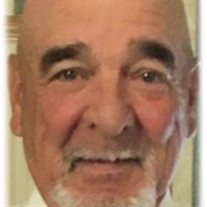 David Lynn Keymon departed this life on Friday, April 1, 2022, at the age of 67 years and 6 months. He was born in Gibson County, Tennessee, on October 1, 1954, the son of the late JC and Delta Irene Inman Keymon. On September 3, 1974, he was united in marriage to Marsha Doxsie, who survives. David served his country honorably in the US Army and later was self-employed in lawn care. He was a member of the American Legion and Cornerstone Baptist Church. He loved playing softball, baseball, fishing, camping, watching Jeopardy, and cooking for his church and family. In addition to his wife of 47 years, Marsha of Savannah, Tennessee, David is survived by his son, Chad David Keymon of Savannah, Tennessee; grandson, Matthew David Malipot Keymon; sisters, Nora "Dottie" Wilkey of Braidwood, Illinois, Sandra "Sandy" McFarland of Galveston, Indiana, and Sharon Leigh Hoseapple of Hohenwald, Tennessee. Along with his parents, David was preceded in death by his sisters, Geraldine "Sue" Wilczak and MaryLois Wintjen; and brothers, Timothy Keymon and Glynn "Buddy" Keymon.

The family of David Lynn Keymon created this Life Tributes page to make it easy to share your memories.

Send flowers to the Keymon family.