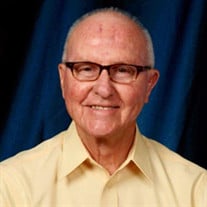 Dean Guyer departed this life on Thursday, July 16, 2020, at the age of 81 years, 10 months, and 6 days. He was born in Memphis, Tennessee on September 10, 1938, the son of the late John Henry and Lola Mary Butler Guyer. On June 11, 1965, he was united in marriage to Patricia Ann Young, who survives. Dean served his country in the United States Army from 1961 until his honorable discharge in 1964. He had worked for the U.S. Postal Service and South Central Bell, which later became AT&T, in Memphis, Tennessee. Dean loved the Lord and his church family at Riverview Baptist Church in Savannah, Tennessee. He had a love for woodworking, and watching his grandchildren in their sports, music, and whatever other activities they may be involved in at the time. In addition to his wife of 55 years, Patricia Ann Guyer of Crump, Tennessee; Dean is survived by his children, Allen Guyer and his wife Kristy of Savannah, Tennessee, and Kim Vickery and her husband Chris of Crump, Tennessee; grandchildren, Brittney Nunnally, John Guyer, Ryan Guyer, Parker Vickery, and Paxton Vickery; great grandchildren, Sadie Rae Nunnally and Wade Thomas Nunnally; and his sister, Carolyn Graves. Along with his parents, Dean was preceded in death by his brothers, Henry, Roy, and Jay Guyer. Memorial donations may be sent to Riverview Baptist Church, c/o Memphis Union Mission, 6750 TN-226, Savannah, TN 38372.

The family of Dean Guyer created this Life Tributes page to make it easy to share your memories.

Send flowers to the Guyer family.