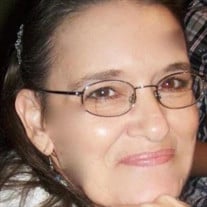 Deborah Lynn Brewer, age 65, passed in her sleep in the early hours of the morning, after complications from COPD, on Tuesday, May 4, 2021. She was born in Lowell, Massachusetts on September 2, 1955. After moving several times as a child, her family settled in Memphis, Tennessee, when Debbie was a teenager. She was a graduate of Whitehaven High School in Memphis. She presided in Memphis for many years before deciding Bolivar, Tennessee, was where she and her husband, Scott, chose to call home in 2001. Debbie was known for being an honest, outspoken, hardworking wife and was a mother of 5. She was a manager in the retail world for many years before starting her own house cleaning business with her sister. She continued running that business until her retirement in 2018. Anyone that knew Debbie knew she had the mouth of a sailor and the heart of an angel. Her children can not recall a time when they did not have someone living with them growing up, and that trend continued throughout Debbie’s life. She opened her home to anyone in need of help in hard times. She touched the heart of everyone around her in some form or fashion. The love she had for her family was on full display every day, but she really cherished having huge gatherings with lots of food, family, and laughter. Christmas was her favorite holiday to surround herself with her husband, children, grandchildren, and great-grandchildren and celebrate being together. She had a great love for the mountains and traveling with her husband. She also had a love for her animals that was unrivaled. Her cats were every bit a part of her family as her kids. Her absence will be felt by so very many. Debbie was preceded in death by her parents Richard Frederick Goudie and Veldora Jean Hughes, sisters Charlene Diane (Goudie) Olson and Karen Louise (Goudie) Follis, father in-law James Levine Brewer and brother in-law Ronald Mitchell Brewer. She is survived by her husband of 26 years James Scott Brewer, of Bolivar ,TN, her 5 children and spouses; Melissa Renee Glenn (Jordan) of Lakeland, TN, Laura Nicole Black (Nathan) of Millington, TN, Tamra Jean Oakley of Memphis, TN, Richard Anthony Oakley (Ashley) of Memphis, TN, and James Christopher Brewer of Bolivar, TN, her 10 grandchildren; Gage Black, Ryan Wright (Amber), Kyra Black, Devin Oakley, Brandon Schnetzler, Daniel Oakley, Cody Schnetzler, Tia Shipp, Samantha Oakley, and Sarah Oakley, and 5 great-grandchildren. Debbie has four living siblings, Richard Frederick Goudie Jr (Kathy), Cheryl Ann (Goudie) Simco, Dawn Doreen (Goudie) James (Keith), Jacob Courtland Goudie (Dianna), step mother Sheila (Lingenfelter) Goudie, mother in-law Mary Joyce (Mitchell) Brewer, and sister in-law Kimberly Gayle (Brewer) Culbreath. There are far more family and friends she touched with her love and you know who you are. There will be a celebration of Debbie’s life soon, but a date has yet to be determined. In lieu of flowers the family requests you donate to these causes in her name: www.copdfoundation.org or www.lung.org.

Deborah Lynn Brewer, age 65, passed in her sleep in the early hours of the morning, after complications from COPD, on Tuesday, May 4, 2021. She was born in Lowell, Massachusetts on September 2, 1955. After moving several times as a child, her... View Obituary & Service Information

The family of Deborah Lynn Brewer created this Life Tributes page to make it easy to share your memories.

Deborah Lynn Brewer, age 65, passed in her sleep in the early...