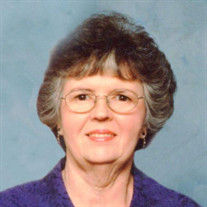 Deretha Hosea Wilbanks was born in Caruthersville, Missouri on October 20, 1942 the daughter of the late Melvin and Murleen Porter Hosea. On June 1, 1966 she was united in marriage to Bobby Charles Wilbanks, who preceded his wife in death... View Obituary & Service Information

The family of Deretha Hosea Wilbanks created this Life Tributes page to make it easy to share your memories.

was born in Caruthersville, Missouri...