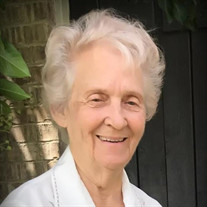 Dessie Knipper Mayberry, 92, departed this life Saturday, October 16, 2021 at Millington Health Care Center in Millington. She was born Friday, August 2, 1929, in Hardeman County, daughter of the late Jack and Ida Lea Vaughn Tillman and lived here until she moved to Memphis in 1999. She was a seamstress with Hardeman Garment, retiring from there, and was a homemaker. Mrs. Mayberry enjoyed gardening, planting things in the soil and working with her flowers. She was well known for her phone conversations but most of all, that she truly cared for other people and dearly loved her family. She was a member of Bartlett Woods Church of Christ. Survivors include her sons, Joseph M. Knipper, Sr. (Carol) of Bartlett and James Edward Knipper (Carole) of Sedro-Woolley, WA; a sister, Jane Montgomery (Charles) of Pottsboro, TX; eight grandchildren, Joshua Marcom Knipper (Jaimie), Jonathan Matthew Knipper (Valerie), Brandy Sawyer (Steve), Jaime Knipper, Misty Neves (Brian), Michael R. Whitney (Amber), Jannelle Bernhardt (Chad) and Jacob Knipper (Lyndsey); fifteen great grandchildren and numerous nieces and nephews. In addition to her parents, she was preceded in death by a grandson, Joseph "Joey" Knipper, Jr.; her sisters, Bessie Harbin, and Betty Harris; and her brothers, Lloyd, Charlie, Joe and Cecil Tillman. Memorial contributions in her name may be sent to the Susan G. Komen Breast Cancer Foundation (www.secure.info-komen.org) or St. Jude Children's Research Hospital (www.st.jude.org/donate)

The family of Dessie Knipper Mayberry created this Life Tributes page to make it easy to share your memories.

Send flowers to the Mayberry family.