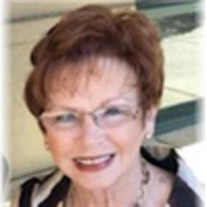 *****Private Memorial Services will be held at a later date***** *****The family requests no floral deliveries for the service***** Doanne Stanford, age 76, of Saulsbury, TN died Monday morning, September, 6, 2021, at Germantown Methodist Hospital. She was born Wednesday, April 18, 1945, in Shelby County, daughter of the late Leonard Govan Malone and Mildred Rasberry Malone. She married Terry Wayne Stanford on Feb. 3, 1982 in Dancyville, TN, and together they enjoyed life. Mrs. Stanford retired in 1988 from the medical field in Memphis and served as a volunteer dispatch and firelady with the Saulsbury Fire Department for 12 years. She was a 1963 graduate of White Station High School and loved being around wildlife, including turkeys, foxes, racoons, cats, birds and all animals. She was known to be an avid shopper, especially when it came to jewelry. Mrs. Stanford was a member of Pleasant Grove Baptist Church in Saulsbury, TN. Survivors include her husband, Terry Wayne Stanford; two daughters, Gina Prater of Biloxi, MS and Lisa Booth (Jerry) of Southaven, MS; two sons, Joe Stanford (Stacy) of Horn Lake, MS and B.J. Stanford (Morgan) of Collierville; her grandchildren who lit up her world, Brittany, J.W., Mallory, Tanner, Dalton, Cayson, Grant, Emily and Sara; five great grandchildren and two sisters, Ellen Moore of Union City and Dale McLafferty (Neil) of Houston, TX. In addition to her parents, she was preceded in death by a brother, Leonard "Buddy" Malone and a sister, Linda Slagle. Memorial contributions in her name may be sent to the Gideons International (sendtheword.org)

The family of Doanne Stanford created this Life Tributes page to make it easy to share your memories.