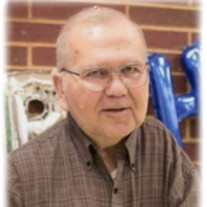 Donald Blevins departed this life on Sunday, March 20, 2022, at the age of 72 years and 3 days. He was born in Hardin County, Tennessee on March 17, 1950, the son of the late Bill and Hazel Stanford Blevins. On June 29, 1974, he was united in marriage to Rhonda Vandiver, who survives. Donald had worked for the Hardin County Sheriff's Department and was a member of The Sanctuary in Milledgeville, Tennessee and the Adamsville Senior Center. He was the past president of FOP Shiloh Lodge #37, a receiver of the Buford Pusser Law Enforcement Career Achievement Award in 1997 and the Governors Committee on Employment of the Handicapped Achiever Award in 1975. In addition to his wife of 48 years, Rhonda Blevins of Adamsville, Tennessee; he is survived by his children, Sharla Franklin and her husband Randall of Adamsville, Tennessee, Melanie Blevins of Milan, Tennessee, and Roger Blevins and his wife Michele of Adamsville, Tennessee; grandchildren, Brooke McCammon, William McCammon and his wife Tabitha, Alexis Blevins, Gavin Franks, Haylee Welch, Hayden Blevins, Annabelle Blevins, Abigail Blevins, and Elijah Blevins; great grandchildren, Asher McCammon, Kinsley McCammon, and Kali Hatch; and sister, Barbara Prather and her husband John of Corinth, Mississippi. Along with his parents, Donald was preceded in death by his brothers, Jimmy Blevins and Glenn Blevins.

The family of Donald Blevins created this Life Tributes page to make it easy to share your memories.

Send flowers to the Blevins family.