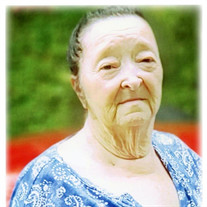 Dorothy Hairfield departed this life on Sunday, August 22, 2021, at the age of 74 years, 10 months, and 15 days. She was born in Virginia on October 7, 1946, the daughter of the late Lem and Claire Virginia George Roberts. In 1980, she was united in marriage to Robert Edward Hairfield, who preceded her in death on March 16, 2013. Dorothy was a homemaker and enjoyed spending time with her family, reading, and crocheting. She was of the Pentecostal belief. Dorothy is survived by her children, Timmy Hairfield and his wife Brenda, Julia Benson and her husband Ronnie, Sam Hairfield and his wife Crystal, and Daniel Hairfield, all of Savannah, Tennessee; grandchildren, Wesley Reep, Bradley Hairfield, Justin Franks, James Robert Hairfield, Christy Banks, and Kala Benson; great grandchildren, Skylar Benson, Jack Banks, Kyle Reep, Tyler Reep, and James Alexander Franks; brothers, Tom Roberts, Sam Roberts, and Wayne Roberts, all of Virginia; and sisters, Mary Bennett of North Carolina and Mae Benson of Savannah, Tennessee. In addition to her parents and her husband, Dorothy was preceded in death by a grandchild, Michael Hairfield; brothers, J.B. Roberts and Druary Roberts; and a sister, Anna Massey.

The family of Dorothy Hairfield created this Life Tributes page to make it easy to share your memories.

Send flowers to the Hairfield family.