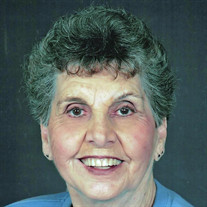 Dorothy Mae "Dottie" Cox, 95, of Hornsby, passed away Tuesday, December 29 at her home. The widow of Vernon G. Cox, who died on September 16, 1984, she was a homemaker and farmer's wife. She married him on December 2, 1942, after meeting him at her grandmother's boarding house and stating "I'm going to marry that man", and moved here from the big city of Cleveland, in 1948 to become a country girl. She was born in Cleveland, Ohio on August 13, 1925, the only child of the late Leonard Henry Humm and Dorothy Agnes Kotzbach Humm. Her mother passed away when she was young and her father remarried Harriet Humm, who also preceded her in death. Mrs. Cox was an Avon Representative for over 30 years, having just recently retired. She loved to cook, sew and crochet, paint, grow flowers, especially African Violets, garden and dance, even into her 80's. She enjoyed attending Hee Haw every year was also a huge fan of University of Tennessee sports, loving to watch all their games. She was well known for sending cards to family and friends and neighbors and enjoyed all holidays and family gatherings, especially Christmas. Mrs. Cox was a member the Eastern Star and Powells Chapel Methodist Church, where she was a former Sunday School teacher for many years and served on several committees. Survivors include 4 daughters, Nancy Powers of Middleton, Linda McMahan of Hornsby, Lana Dixon (Jim) of Bartlett and Karen Hunt (Bob) of Olive Branch, MS; three sons, Kenneth R. Cox of Harrisonville, MO, Gary V. Cox (Glenda) of Bolivar and Tim Cox (Sandra) of Hornsby; 18 grandchildren; 36 great grandchildren and 13 great great grandchildren. In addition to her husband and parents, she was preceded in death by a grandchild, Megan Hunt; two son in laws, Troy Ronald Powers and Joe Kenneth McMahan; a daughter in law, Doris Cox; and a stepgrandson, Randy Hedger. Memorial contributions in her name may be sent to Powells Chapel United Methodist Church or the Powells Chapel Cemetery Fund. THE FAMILY OF MRS. COX REQUESTS ANYONE ATTENDING THE VISITATION OR SERVICE PLEASE WEAR A MASK OR FACIAL COVERING. While visiting or attending services for Mrs. Cox, please consider the following guidelines: * Maintain 6 feet between yourself and the next closest person; * Refrain from hugs and handshakes; * When you sneeze or cough, use your elbow to cover your nose and mouth; * Wash your hands often; * Avoid touching your face; and * Minimize time spent in places where people gather. Thank you for your consideration.

Dorothy Mae "Dottie" Cox, 95, of Hornsby, passed away Tuesday, December 29 at her home. The widow of Vernon G. Cox, who died on September 16, 1984, she was a homemaker and farmer's wife. She married him on December 2, 1942, after meeting him... View Obituary & Service Information

The family of Dorothy Mae "Dottie" Cox created this Life Tributes page to make it easy to share your memories.

Send flowers to the Cox family.