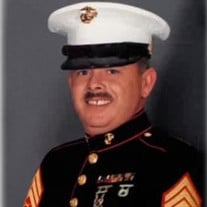 DOUG WYATT Chester County, TN: Herron Douglass Wyatt age 67 passed away January 25, 2022 at Jackson Madison County General Hospital. He was born July 14, 1954 in Jackson, TN, the son of the late Gavin Edward and Delphia D. Cupples Wyatt. He grew up in Pinson and graduated from South Side High School in Jackson in 1972. He joined the USMC in 1973 and served twenty years, retiring as Master Sgt., earning numerous achievements and Commendation Medals. He then worked for Lowes in Jackson for a little over twenty years. He married Mary Conners on July 3, 1973. They've made their home in Chester County since 1994. He enjoyed camping, fishing, woodworking and reading. He was very talented and built his own home. He loved his grandkids and enjoyed spending every minute he could with them. He coached his boys in baseball and his daughter in softball and enjoyed going to all the sporting events his children and grandchildren participated in. Mr. Wyatt is survived by his wife Mary Conners Wyatt of Chester County, formerly from Chicago; three sons, Doug Wyatt, Jr. (Alida) of Leesburg, GA, John Wyatt (Sarah) of Jackson and Jeff Wyatt (Farrah) of Jackson; a daughter, Megan Welch (Joseph) of Jackson; five grandchildren, Gavin Wyatt, Anna Marie Wyatt, Junah Wyatt, Easton Welch and Ace Wyatt; two brothers, Jerry Wyatt (Jewell) of Henderson and Gavin Wyatt, Jr. (Gina) of Wildersville, TN and a sister, Kathy Conners (George) of Chester County. He was preceded in death by his parents, five brothers, Billy, Larry, Eddie, Jimmy and Joe Wyatt and two sisters, Barbara “Bobbie” Holloway and Linda Strawbridge. A memorial service with Military Honors will be held at 1:00 PM, Saturday, February19, 2022 at the Skyline Church of Christ, 1024 Skyline Drive, Jackson, TN. Shackelford Funeral Directors of Henderson 731-989-2421

The family of Doug Wyatt of Beech Bluff created this Life Tributes page to make it easy to share your memories.

Send flowers to the Wyatt family.