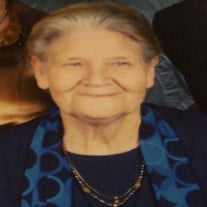 Dovie K. Franks departed this life on Monday, December 14, 2020, at the age of 93 years, 2 months, and 1 day. She was born in Hardin County, Tennessee on October 13, 1927, the daughter of the late Robert and Donie Hopper Jones. On April 10, 1943, she was united in marriage to Buster "Babe" Franks, who preceded her in death on July 8, 2012. Dovie was a hard working woman and retired from Angelica Manufacturing. She loved her family, especially her kids, loved flowers and going fishing. She was a member of Lighthouse Pentecostal Church. Dovie is survived by her children, William "Bill" Franks and his wife Effie of Union City, Tennessee, Marvin D. Franks and his wife Linda, Betty Norris and her husband Marvin, Danny Franks and his wife Sharon, and Barbara Hollingsworth, all of Savannah, Tennessee; brothers, Bobby Jones and Billy Jones, both of Savannah, Tennessee; sisters, Dorothy Frazier and Betty Jo Harris, both of Savannah, Tennessee; 12 grandchildren; 23 great grandchildren; and four great-great grandchildren. In addition to her parents and her husband, Dovie was preceded in death by a son, Herman Franks; a daughter, Wilma Franks, who was 14 months old; brothers, James Jones, Elmer "Ab" Jones, Kenneth Jones, Jimmy Jones, and Robert Earl Jones; and sisters, Gladys Tidwell and Ruby DeShazier.

The family of Dovie K. Franks created this Life Tributes page to make it easy to share your memories.