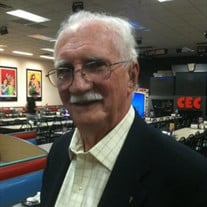 Rev. Dr. Edgar Hardin Gillock, 92, of Bolivar, departed this life Saturday, February 27 at Bolivar General Hospital. Rev. Dr. Gillock was born at home in Savannah, TN and delivered by Dr. Culp of Clifton, TN on July 30, 1928. His parents were Ruth McLemore Hardin Gillock and Edgar Cherry Gillock. He graduated cum laude from Memphis State University with a Bachelors in Education and a Masters in Education Administration. He received his law degree from Southern Law School (now University of Memphis Law School) and was the president of his law school class. He also received his Doctor of Theology from Memphis Theological Seminary. He served in both World War II and the Korean War. He was a member of the U.S. Navy and the U.S. Army Air Corps and was a disabled veteran. He was a trial lawyer for many years in Shelby County and throughout the state of Tennessee. He was a member of the Tennessee House of Representatives for 4 years and the Tennessee Senate for 14 years. He later became an ordained Cumberland Presbyterian minister. He was a lifelong member of the Tennessee Trial Lawyers Association, President of the Frayser Jaycees and an active member in many civic and charitable activities. His interests included a love of quail hunting, fishing, reading, and exploring his ancestry. In 2018, he published the book My Life as I Recall It. Some notable ancestors include Colonel Valentine Sevier, Colonel Joseph Hardin and the first governor of Tennessee, John Sevier. He was always willing to help someone in need and never met a stranger. He is survived by his wife, Harriet Thompson Gillock; daughter, Debra Casey; son, Lee Gillock and wife, Karen; daughter, Denise Fletcher and husband, Terry; daughter, Laura O'Mell; daughter, Lorri Cordelli and husband, Pete; son, Robert Gibbs and wife, Barbara; son, Ed Gillock II and wife, Tamar; and a step-daughter, Emily Parks and husband, Jason. He is also survived by his grandchildren, Bill Gourley and wife, Jenny; Amber Gillock; Cortney Kovnes and husband, Shane; Jason Alexander; Brandon O'Mell and wife, Catherine; Michael O'Mell; Katie Myers and husband, Dan; Kelli Hoover and husband, Burt; Dr. Sara Hagan and husband, Shane; Bryan Gibbs; John Gibbs; Lydia Gillock; Claire Gillock; Georgia Gillock; Serenity Gillock; Jenny Crews and husband, Joel; Julie Holliman and husband Aaron; and Thompson Parks; as well as, all of his beloved great-grandchildren. He is also survived by his sister, Julia Gillock Hoppe and husband, Bill; nieces, Lisa Hoppe and Carol Jefferies; nephew, Greg Hoppe and a host of other relatives and friends. He was preceded in death by his parents and two son-in-laws, John Casey and Herbie O'Mell. In lieu of flowers, memorials may be made to a charity that is special to you. The family would like to request that anyone attending funeral services please wear a face mask and practice social distancing.

The family of Rev. Dr. Edgar Hardin (Ed) Gillock created this Life Tributes page to make it easy to share your memories.

Send flowers to the Gillock family.