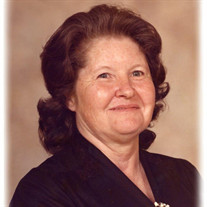 The family requests that masks be worn, and social distancing be practiced at both the visitation and the funeral service. Elizabeth Harville departed this life on Saturday, September 11, 2021, at the age of 93 years, 6 months, and 28 days. She was born in Wayne County, Tennessee, on February 14, 1928, the daughter of the late William Henry and Lillie Brewer Melson. On April 10, 1948, she was united in marriage to James E. Harville, who preceded her in death on April 7, 2004. She and dad worked tirelessly in their massive gardens that they grew every year, planting, growing, and picking. Elizabeth would can hundreds and freeze even more containers of the vegetables so her family would have plenty of food for the winter. They sold and gave away literally tons of food every year. No one they knew, or knew of, would ever go hungry. Anyone coming to visit would always leave with food fresh from her garden or jars of what she canned. There was no more a virtuous woman than Mama. For over 70 years she was a faithful member of Graham United Methodist Church. She also helped with the election every year and was named "aide-de-camp" to Governor Ned McWherter. Elizabeth is survived by her daughters, Patsy Lavonne Harville Hyde of Savannah, Tennessee, Mary Jane Harville Wolfe and husband Herman "Butch" of Memphis, Tennessee, and Donna Jean Harville Owens of Savannah, Tennessee; grandchildren, James R. Shelby, Holly Morgan Tacker, Candy Owens Smith, Heather Morgan Wall, Chris Owens, Trey Wolfe, Richard Wolfe, Amanda Duncan Williams, James Harley Harville, Trevor Harville, and Jordan Harville; 18 great grandchildren; numerous step-granchildren and step-great grandchildren; and a host of nieces and nephews that she loved as though she had birthed them. In addition to her parents and husband, Elizabeth was preceded in death by a son, James N. Harville; sisters, Carrie Welch, Sarah Franks, Gladys Brown, Christine Melson, and Mary Annie Melson; and brothers, Robert, John, Pony, Charlie, Herbert, Frank, Austin, Virgil, and Billy Melson. Memorial donations can be made to the Alzheimer's Association, 225 N. Michigan Avenue, Floor 17, Chicago, IL 60601 or www.alz.org.

The family requests that masks be worn, and social distancing be practiced at both the visitation and the funeral service. Elizabeth Harville departed this life on Saturday, September 11, 2021, at the age of 93 years, 6 months, and 28 days.... View Obituary & Service Information

The family of Elizabeth Harville created this Life Tributes page to make it easy to share your memories.

The family requests that masks be worn, and social distancing...

Send flowers to the Harville family.