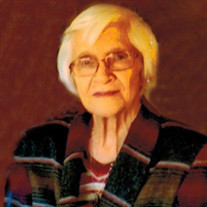 ELOISE TALLEY MURLEY Henderson, TN: Mary Eloise Wood Murley age 85 passed away peacefully, February 13, 2021, at the Henderson Health & Rehabilitation Center. She was born October 5, 1935 in Henderson at the home of her Aunt Florence Murley Strauus the daughter of the late Robert Brancy (R.B.) and Mattie Frances Murley Wood. She was raised in Henderson and attended Chester County Schools. She worked for Guy Walker Livestock Sales in Lexington for many years and also at Gano Food Service at Freed Hardeman University. She loved to keep her nieces and nephews throughout the years. She was an avid pet lover and up until her death she had a loving pet. She was member of the Bethel Baptist Church. Mrs. Murley is survived by her daughter, Celia Talley Murley (Rickey) of Henderson; three grandsons, Craig Murley (Renee’) of Chattanooga, TN, Clay Murley (Shondra) and Clint Murley (Amber) of Henderson, TN; six great grandchildren, Will and Kate Murley of Chattanooga, TN, Corey Johnson and Ella Murley of Henderson, TN and Riley and Bailey Murley of Henderson, TN; a nephew, Hiram George Wood of Memphis, a sister-in-law, Joanne Talley VanCleave of Henderson, Joyce Stewart of Henderson, and Jane Hayes of Lexington; a brother-in-law, Cecil Billy Murley of Henderson; a host of nieces and nephews. She was preceded in death by her parents, her husband, Charles E. Murley on August 21, 2019 and two brothers, Robert Brancy Wood, Jr. and Hiram Wood. Funeral services will be 2:00 PM Wednesday, February 17th at Shackelford Funeral Directors – Crook Avenue with David Tull officiating. Burial will be in Bethel Cemetery. The family will receive friends at Crook Avenue from 12:00 PM to 2:00 PM on Wednesday. In lieu of flowers the family request donations may be made to the City Hall Henderson, P.O. Box 68, Henderson, TN 38340 to help take care of the pound animals or Chester T. Dog Park. Shackelford Funeral Directors of Henderson 731-989-2421

The family of Eloise Talley Murley of Henderson created this Life Tributes page to make it easy to share your memories.

Send flowers to the Murley family.