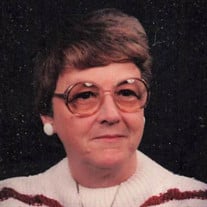 Elsie O'Lear Harmon Hatch was born December 23, 1938 in Hillsville, VA the daughter of the late William Early and Gracie Nuckolls Shockley Harmon. She was united in marriage to David Hatch on December 13, 1962. Mrs. Hatch was a 1957 graduate of Woodlawn High School in Hillsville, VA. She served her Country honorably in the United States Navy WAVES program from December 1, 1958 until November 30, 1962. Mrs. Hatch was one of the original employees of the Selmer Wal-Mart in the late 1970's, and worked for McNairy County General Hospital from the early 1980's until 2000 in Dietary and Environmental Services and as a Nurses' Aide. She attended the Tennessee College of Applied Technology at Crump in the late 1980's, studying Office Administration. Solving word search puzzles, watching old movies, Westerns, and Channel 5 wrestling, looking at old cars, and drinking her morning coffee were her favorite pastimes. Mrs. Hatch was a member of Lakeview Baptist Church when she lived in Selmer and later joined the Good Hope Baptist Church after moving to Adamsville. Mrs. Hatch departed this life on April 17, 2021 in Adamsville, Tennessee at the age of 82 Years, 3 Months, 25 Days. She is survived by her husband David Hatch of Selmer, TN; two sons, Bill Hatch and wife Mary Ellen of Hernando, MS and Tim Hatch of Finger, TN; four grandchildren: Sam Hatch of Grand Rapids, MI, Molly Hatch of Memphis, TN, Ben Hatch and wife Erika of New Orleans, LA, and Madison Hatch of Finger, TN; and several nieces, nephews, extended family and friends. In addition to her parents, Mrs. Hatch was preceded in death by several siblings and a niece, Melia Harmon. Memorials may be made to the American Cancer Society.

Elsie O'Lear Harmon Hatch was born December 23, 1938 in Hillsville, VA the daughter of the late William Early and Gracie Nuckolls Shockley Harmon. She was united in marriage to David Hatch on December 13, 1962. Mrs. Hatch was a 1957 graduate... View Obituary & Service Information

The family of Elsie O'Lear Harmon Hatch created this Life Tributes page to make it easy to share your memories.

Send flowers to the Hatch family.