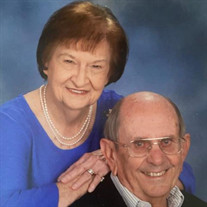 Elvis Glenn Conder, 86, of Germantown, TN, passed away on April 13, 2022. Glenn was born April 21, 1935, in Enville, TN, to Oscar and Cedric Conder. He graduated from Chester County High School and attended David Lipscomb College and Arizona State University. He joined the Air Force, serving from 1957 to 1961, and was responsible for various duties in the supplies and requisition department. Glenn was stationed in Okinawa, Japan and Phoenix, AZ. In 1958, while serving in the Air Force, he married Doris Howard from Michie, TN. In 1962, Glenn moved his family to Germantown, TN, a small town on the outskirts of Memphis with a population of about 1200 people at that time. They became part of the Germantown church of Christ where Glenn served as a deacon as well as the treasurer for many years. Glenn went to work for AMP, Inc. in 1977. He worked there until he retired in 1999. While he was with them, he received multiple sales awards including company salesman of the year on four separate occasions. Glenn was preceded in death by his parents, Oscar and Cedric Conder, his sister, Lois Newman of Henderson, TN, his daughter, Cheryl Sims of Germantown, TN and his grandson, Kevin Conder of Atlanta . Glenn is survived by his wife Doris Conder and their sons, Eddie Conder (Melissa) and Mark Conder (Brenda). He is also survived by eight grandchildren; Chris Conder, Cody Sims, Chelsea Sims, Collin Sims, Becca Price (Brad), Katie Beth Wright, (Tim), Michael Conder, and Eli Conder. In his spare time, he enjoyed pocket billiards, traveling, attending church and activities at Germantown church of Christ, and racing in any form. He will be greatly missed. The family wishes memorial contributions be made to World Christian Broadcasting www.worldchristian.org

The family of Elvis G. Conder of Germantown, TN created this Life Tributes page to make it easy to share your memories.

Elvis Glenn Conder, 86, of Germantown, TN, passed away on April...

Send flowers to the Conder family.