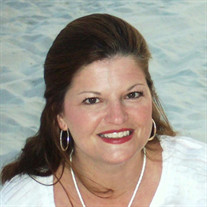 Emily Mychele Wharton Flaherty “Chelly”, of Michie, TN, was born May 28, 1964, in Honolulu, HI. She was the loving daughter of Jayne Presley Wharton Krotchko and the late Melborn Wade Wharton. Chelly graduated from Butler High School in Huntsville, AL, Class of 1982. She married in 1989 and had two daughters, Jessica and Megan Flaherty. She departed this life on February 11, 2021, in Louisville, Kentucky at the age of 56 Years, 8 Months, 14 Days. Chelly was an animal lover, and she enjoyed owning her own pet grooming business. Her heart was huge and so was her unwavering faith despite life’s challenges. She is survived by two daughters, Jessica Lynne Flaherty and Megan Leslie Flaherty of Chelsea, AL, her mother Jayne Presley Wharton Krotchko of Michie, TN, her Uncle Joe (Pat) Presley of Selmer, TN, and Wharton relatives locally and in TX. In addition to her father, Chelly was preceded in death by her stepfather, Gino Krotchko, her maternal grandparents, Ancil and Helen Presley, and her paternal grandparents, Jasper Wharton and Jean Wharton Sipes. The family requests that donations be made to your local humane society in place of flowers - Chelly would have wanted that. Chelly will be greatly missed by her family and all who knew her. She was and is everything a mother, daughter, and person should be. A celebration of her life will be held at a later date.

The family of Emily Mychele Flaherty of Michie, TN created this Life Tributes page to make it easy to share your memories.

Send flowers to the Flaherty family.