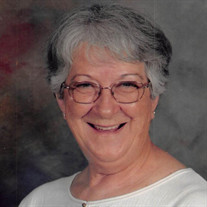 Emily Frances Avent Hammons was born February 25, 1942 in Hardeman County, TN to the late Phenton and Ena Adams Avent. Emily was united in marriage to Lucian Ermergene “Gene” Hammons on October 24,1964. They were married 56 years and 5 months. Emily and Gene lived and raised their family in Middleburg which is located in southwest Hardeman County. Emily graduated from Bolivar Central High School then lived and worked in Memphis, TN. Two years after her marriage to Gene, they began their family and she was a homemaker and part-time farmer herself. Yes, she could disk soybeans and rake hay almost as good as Gene. She also managed the Garden Center at the Hardeman County Farmers Co-op for 6 years. Emily was a longtime member of Middleburg Baptist and First Baptist Church of Bolivar. She was a loving wife and mother, good friend and awesome cook. Emily departed this life on April 5, 2021 at the age of 79. She is survived by her husband: Gene; three children: Cindy Hammons of Southaven, MS, Jeff Hammons (Lana) of Dyersburg, TN, and Shannon Wiggins (Jeff) of Burlington, NC; eight grandchildren: Mica Tranum (Brandon), Josh Collins, Makenzie Hammons, Bailee Andrews (Phillip), Olivia Howell, Caroline Howell, Catherine Wiggins, and Morgan Hammons; four great-grandchildren: Hunter Tranum, Henleigh Tranum, Thatcher Young, and baby Andrews due in October 2021. She is also survived by five sisters and one brother-in-law: Elizabeth McCommon, Hazel Aldrich, Hester Cardenas, Georgia Philip (Bucky), Elane Haino; one brother and two sisters-in-law: Bill Avent (Brenda), Donna Avent; and many extended family and friends. In addition to her parents, Emily was preceded in death by one brother: Ricky Avent. Emily’s family wishes to express their gratitude to all family and friends for their prayers and concern during this difficult time. In lieu of flowers, memorials may be sent to the American Cancer Society. ** THE FAMILY RESPECTFULLY REQUESTS EVERYONE ATTENDING VISITATION OR SERVICES, PLEASE WEAR A MASK OR FACIAL COVERING. THANK YOU! **

The family of Emily Frances Hammons created this Life Tributes page to make it easy to share your memories.

Send flowers to the Hammons family.