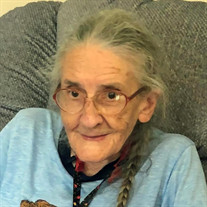 Erika Schulz, 89, departed this life Friday morning, March 4, 2022, at Pine Meadows Healthcare Center in Bolivar. She was born Monday, May 16, 1932, in Germany, daughter of the late Karl Albert Max Beckmann and Minna Wanda Hulda Wittke Beckmann and grew up there, migrating to Toronto, Canada. She married Wilhelm Schulz, who preceded her in death, and became a US Citizen, living in the Chicago area. She later moved to Covina, California. In 2011, Mrs. Erika moved to Middleton, where she lived until her death. She loved God, reading her Bible, singing hymns and going to church at every service. She adored animals of all kind. Her constant prayer was "Pray for Israel and the peace of Jerusalem". Her favorite verse was John 3:16, "For God so loved the world, that He gave his only begotten Son, that whosoever believeth in Him should not perish, but have everlasting life". She was a beloved member of Trinity Independent Baptist Church. Survivors include a sister in law, Renate Schulz and a great niece, Savannah Schulz.

The family of Erika Schulz created this Life Tributes page to make it easy to share your memories.

Send flowers to the Schulz family.