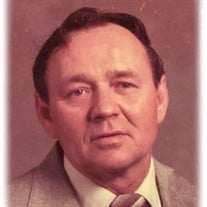 Eunice Leo Potete of Savannah, TN was born August 7, 1932 in Waynesboro, TN, the son of the late James Burton and Laura Belle Duncan Potete. He was united in marriage to the former Dorothy Sue Nell Staggs on October 25, 1955. Mr. Potete retired after working in auto collison repair for many years. He served his country in the United States Army from 1952 to 1957 and departed this life on Friday, May 6, 2022 at Adamsville Health and Rehabilitation in Adamsville, Tennessee at the age of 89 Years, 8 Months, 29 Days. He is survived by his wife, Dorothy Sue Nell Staggs Potete of Savannah, TN; two sons, Ricky L. Potete, wife, Judith of Adamsville, TN and David K Potete, wife, Pamela of Chicago, IL; 7 grandchildren;15 great-grandchildren; brother, Colin Potete and wife, Sylvia Mae and a sister, Mary Lois Morgan all of Waynesboro, TN. In addition to his parents, Mr. Potete was preceded in death by brothers, James Earnest Potete and Charles Ralph Potete and sister, Bernice Virginia Potete. A graveside service with military rites will be held on Tuesday, May 10, 2022, 2:00 pm at McGlamery Cemetery, Collinwood, Tennessee with David Potete officiating. Visitation will be one hour before the service time at the cemetery with Shackelford Funeral Directors, Wayne County assisting the family,

The family of Eunice Leo Potete, Savannah, TN created this Life Tributes page to make it easy to share your memories.

Send flowers to the Potete family.