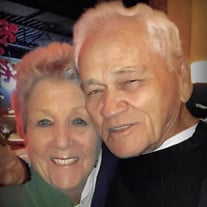 Evan (Buzzy) Forbess Mr. Evan "Buzzy" Forbess, 86, of Grand Valley, passed from this life on Wednesday, December 30, 2020 at his home. Buzzy was born December 27, 1934 to Acey Lloyd and Elgie Gross Forbess in Memphis, TN. He attended Humes High School where he began a close friendship with Elvis Presley and graduated in 1955. As his loyal companion, Buzzy has been asked numerous times throughout the years to authenticate stories that were being told regarding Elvis' life. He worked at MLG&W for "36 years, 6 months and 7 days" before retiring. He was married to Marilyn Yvonne Tatum on May 17, 1969, they were together 54 1/2 years. They moved to Hardeman County in 1995, settling at Grand Valley Lakes Resort. Buzzy was known to be an avid sportsman, fishing and hunting, playing golf, baseball, basketball and football. In 1989 he was inducted to the Memphis Amateur Sports Hall of Fame as a football player. At age 40, he was a fast-pitch softball pitcher. He had 2 hole-in-ones, one in Blytheville and the other at Crockett in Memphis. He double-eagled at the Hardeman County Golf and Country Club and bought himself a trophy. A master gardener, Buzzy kept two gardens and numerous fruit trees. He was known to shy away deer from his gardens with his 410, but after accidentally killing two with one shot he switched to using a BB gun. He and his wife Marilyn enjoyed music and dancing together. A member of Bellevue Baptist Church since youth, he and Marilyn attended Hickory Valley Baptist Church. Survivors include his wife Marilyn; three daughters, Dorrie Lynn Forbess of Pass Christian, MS, Johanna Fawn VanderVyver (Tino) of Grandview, MO and Lisa Lumpkin of Eads, TN; three sons, Stephen Forbess (Erica) of Bunlevel, NC, Joseph Forbess (Beth) of Idaho; and Joseph Lumpkin of Grand Valley, TN; 13 grandchildren and 3 great-grandchildren. In addition to his parents, he was preceded in death by two sisters, Jesse Brooks, and Mary Alma Brooks, and an infant brother, Acey Lloyd Forbess, Jr. A private family service will be held for Mr. Forbess due to the ongoing pandemic. THE FAMILY OF MR. FORBESS REQUESTS ANYONE ATTENDING THE VISITATION OR SERVICE PLEASE WEAR A MASK OR FACIAL COVERING. While visiting or attending services for Mr. Forbess, please consider the following guidelines: * Maintain 6 feet between yourself and the next closest person; * Refrain from hugs and handshakes; * When you sneeze or cough, use your elbow to cover your nose and mouth; * Wash your hands often; * Avoid touching your face; and * Minimize time spent in places where people gather. Thank you for your consideration.

The family of Evan "Buzzy" Forbess created this Life Tributes page to make it easy to share your memories.

Send flowers to the Forbess family.