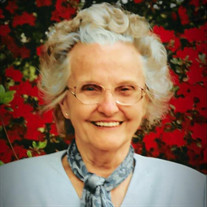 Mrs. Lax passed from this life on Thursday morning, August 13, 2020, at her home in Hickory Valley, TN. She was born in Fayette County on Saturday, September 26, 1925 to the late Frankie L. and Ada Adline Smalley Davis and lived there until the family moved to Hardeman County when she was a teen-ager. She married Mr. Joseph Lafayette Lax on October 31, 1948. He passed away on Saturday, February 24, 1968. She had lived most of her life in Hickory Valley. Mrs. Lax worked as a caregiver and sitter for many years and also had been employed at Troxel Manufacturing near Moscow. She was a member of Hickory Valley Baptist Church where she taught Sunday School and kept the nursery. Described by her children as a strong woman, she worked hard to rear her family following the sudden death of Mr. Lax. A talented cook, she loved being a good Momma and Nana to them all. Mrs. Lax enjoyed staying active whether it be tending to her yard, caring for her flowers or getting her exercise walking around Hickory Valley. Community-minded and full of civic pride, she used her walks as an opportunity to help keep Hickory Valley free from litter and a beautiful place to live. She leaves her daughter, Jacque Jackson (Lynn) of Bolivar; her son, Duane Lax (Renita) of Hickory Valley; five grandchildren, Jody Jackson (Angela), Amy McKenzie (Mark), Cody Brint (Angela), Colton and Morgan Lax; and nine great-grandchildren, Jace, Anna and Blake McKenzie, Hayden and Hudson Jackson, Brooke Brint, Evan, Kyli and Charli Sherman. In addition to her husband and parents, she is preceded in death by five sisters, Opal Fawcett, Addie Lee Clampitt, Pauline Martin, Mavis Davis and an infant sister; and three brothers, Lavern, Frankie and Jack Davis. Memorials may be sent to the Hickory Valley Baptist Church or the Mount Olive Cemetery Fund. When attending visitation or services for Mrs. Lax, please consider the following guidelines: * Maintain 6 feet between yourself and the next closest person; * Refrain from hugs and handshakes; * When you sneeze or cough, use your elbow to cover your nose and mouth; * Wash your hands often; * Avoid touching your face; and * Minimize time spent in places where people gather. Thank you for your thoughtfulness and consideration.

Mrs. Lax passed from this life on Thursday morning, August 13, 2020, at her home in Hickory Valley, TN. She was born in Fayette County on Saturday, September 26, 1925 to the late Frankie L. and Ada Adline Smalley Davis and lived there until... View Obituary & Service Information

The family of Evelyn Lax created this Life Tributes page to make it easy to share your memories.

Mrs. Lax passed from this life on Thursday morning, August 13,...