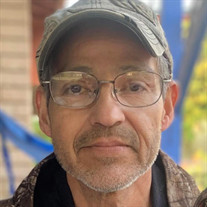 Alfredo Contreras Cruz, Sr. was born July 23, 1962 in San Antonio, TX, the son of the late Toribio Cruz and Guadalupe Contreras Cruz. He worked for Aqua Glass in Adamsville for 25 years, Crazy K Ranch and was a handyman. He enjoyed helping... View Obituary & Service Information

The family of Freddy Cruz Sr. of Selmer, TN created this Life Tributes page to make it easy to share your memories.

Send flowers to the Cruz family.