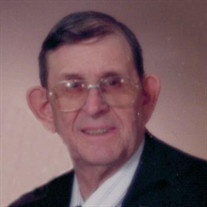 G W “ DUB” RUSH Jacks Creek, TN: G W Rush age 94 passed away July 22, 2021 at his home. He was born August 17, 1926 in the Phillips School community of Chester County, the son of the late Rufus Savage “Shorty” Rush and Mary Elguyvie McConnell Rush. He graduated from Chester County High School in 1945 and entered the U.S. Army the next day. He served in Germany in the army of occupation as a Medical Technician and served in the TN National Guard after the service. He married Nancy Emerson on August 26, 1950 and they made their home in Henderson. He was a member of the Antioch Baptist Church. He worked as a supervisor in the cutting department at Salant & Salant Mfg. He then worked for M & W Ambulance Service, while working at M & W he had a part in the Walking Tall movie. He was one of the first hires at Sonoco Products as a supervisor. He worked as a dispatcher for the Chester County Sheriff’s Department. He thoroughly loved his work as a dispatcher. He was well acquainted with the people of Chester County and Chester County roads, making him an asset to the department. He was a co-founder of C & R Grocery, with his son-in-law, Bobby Connor. C & R represents the Connor and Rush families. He enjoyed working with wood, building furniture. He and Nancy kept exchange students for many years and served as foster parents as well. They had made their home at Jacks Creek for the past five years. He was a member of the Henderson Masonic Lodge for over fifty years. Mr. Rush is survived by his wife Nancy Pearl Emerson Rush, of almost seventy-one years; three daughters, Debra Connor of Jacks Creek, Linda Essary of Jacks Creek and Kimba Harris and husband Tony of Deanburg, TN; eight grandchildren, Terry Connor (Kaye), Toby Connor (Cammy), Ty Connor (Rachel), Jason Essary (Alaina), Justin Essary, Todd Clayton, Kari Perry (Jamie) and Chad Harris (Tracy) and seventeen great grandchildren and two great-great grandchildren. He was preceded in death by his parents, two son-in-laws, Bobby Connor and Jimmy Essary and a brother, Stuart Foster Rush. Funeral services will be 4:00 PM Sunday, July 25th at Shackelford Funeral directors – Crook Avenue with Charles Ward and Mike Rickenbaker officiating. Burial will follow in Chester County Memory Gardens with Military Honors and Masonic Rites at the cemetery. The family will receive friends at Crook Avenue 1:00 PM Sunday until 4:00 PM service time Sunday. Memorials may be made to the St. Jude’s Children Hospital. Shackelford Funeral Directors of Henderson 731-989-2421

The family of G W "Dub" Rush of Jacks Creek, TN created this Life Tributes page to make it easy to share your memories.

Send flowers to the Rush family.